India is a country that for many is out of sight and out of mind, unless we are talking about the food. Even the biggest homebody has at least tried the spice enriched, amalgam of vegetables, curries and marinated meats that is Indian food. However, you’d be mistaken in thinking that because you have tried the India restaurant around the corner, you have a handle on what might be the most diverse cuisine on the planet. If you’re contemplating a trip to India, check out Indian Visa Online for all pertinent visa information.

India food is as varied and multifaceted as the country itself. The surprisingly huge country, seventh largest in the world, is home to mountains, plateaus, plains, deserts, even islands. The wide ranging geography has created distinct regions of rich culinary mastery, based on the climate and culture of each region. It is a drastic oversimplification to break the country down into north and south when it comes to grub, because the chow of east and west India hold their own delicious dietary treasures. Nevertheless, it serves to draw a generic distinction between north and south.

In the north the most famous of Indian food reigns: curry. Alongside India’s sumptuous staple of spices, naan bread, Aloo Ghobi and Samosas are also commonly found. The spice of the north, which may be the second most famous aspect of Indian food, is undoubtedly Garam Masala. For those who are unfamiliar, Garam Masala is a mix of cinnamon, cardamom, nutmeg, peppercorns, cloves, coriander, mace and cumin. While it partially does translate to heat, the spice isn’t necessarily spicy but rather adds a kick of flavor to almost any dish.

Wheat breads like poori, kachori, chapati are the other core part of northern India’s menu. These listed are just a small sampling of the bevy of bread dishes. Peanut, mustard and soybean oils make up the tempering for the majority of their meals. Meat lovers will rejoice at the bounty of kebabs, chicken tikka, butter chicken and more; just don’t expect much beef as cows are held in sacred esteem. That being said, in parts of India, beef can be found. There is also a smattering of fresh water fish to be had. This region of India most closely resembles the Indian food found in western countries, only much better.

In the south, however, rice, stews and lentils are the main dishes, chock full of vegetables, spices and a host of other ingredients. Huli Pudi, known as sambar powder takes precedence over the Garam Masala. Rice dishes such as idli, appam, uttapam and dosa are the staples, which are all fermented batter mixed with rice. These replace the breads of the north. Preferred oils are coconut and sesame. For vegetarians, the south is your nirvana as the dishes are predominately meatless, outside of a wide variety of seafood options pulled from the nearby Malabar Coast. 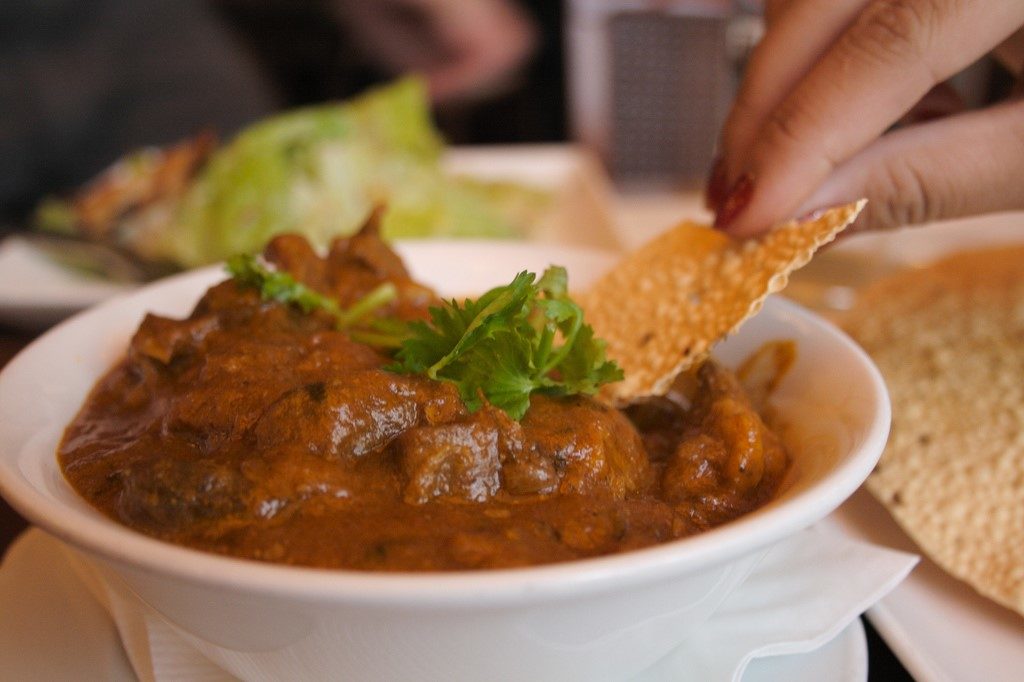 For many a trip to India means curry and lots of it. However, one would be dreadfully mistaken to assume that is all this cornucopia of cuisine has to offer. Northern curry is thicker, made with garlic, ginger, tomatoes and onions while the thinner curries of the south are designed to be soaked up by their delectable rice dishes. Regardless of whether you go north, south, east or west amazing food is to be found at all corners of India. However, navigating the menu can be slightly overwhelming at times. To help you out, here’s a cliff notes guide to India’s menus.

If you are planning a trip to India, be sure to get your visa first at India visa online and push your comfort zone by sampling the wide ranging options. A culinary adventure should be as high on your list as the Taj Mahal! The list of must try foods can be overwhelming; there are that many. So to make things easy, here are three of the most popular Indian dishes, narrowed down from about a hundred. Don’t be mad if your favorite isn’t on it.

Rogan Josh is a lamb dish said to be of Persian origin. The meat is prepared in a gravy of yoghurt, garlic, ginger, and carmelized onions, topped with spices and Kashmiri chillies, not overly spicy and down right delicious.

A Bengali mutton curry that millions of Indians enjoy for lunch daily. Spices, potatoes, and mutton made to perfection, also goes perfectly with rice.

A key rice dish in India, Biryani can come with all type of meat, seafood or even vegetarian. Think of it as India’s fried rice.

Thankfully, even if you can’t understand a single item on the menu, you’re still more than likely to end up with something delicious. So fire away and let your taste bud party begin!